First up were Kate Stevens and Vicky Gilbart contesting the ladies’ plate. Not just having to cope with a tough handicap against the very on-form Vicky, Kate was nursing a painful calf injury that her medical team was unable to alleviate and notwithstanding a superb display of determination and beautifully placed deep shots, Kate had to settle for second place with Vicky a worthy winner. 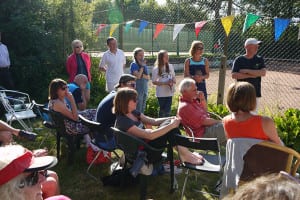 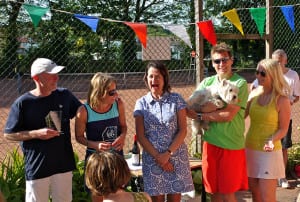 Determination and stamina was very much in evidence in the Mens’ singles plate, fiercely contested between between Louis and Paul with sustained attacking from both sides of the net, epic rallies and no let-up in pace until Paul finally prevailed in the deciding set. A really entertaining match and Louis is surely going to go on to be one of our star players in future years.
The ladies doubles plate was won by a clinically efficient Eva and Jane, beating Sharon and Kim in two sets, 6-0, 6-2. There was some entertaining doubles play to keep the large (!) morning crowd entertained but Eva and Jane never let up on the pressure and Sharon and Kim just couldn’t quite get their game going – a real pity but still a great achievement to have made it to finals day.
The last of the plate finals saw Rachel relying on one good leg (for once not showboating) and Jon Z covering more ground than you’d think possible… It looked like they were finally getting the upper hand against Julia and Ben before painkillers were simply not enough and our valiant pair had to retire in the deciding set, agonizingly (literally) close to the finish line. A fine display from their opponents though who rather sportingly seemed to deliberately try not to take advantage of any weakness on the other side of the net, picking on Jon rather more than they might have done had they been a bit more ruthless… fine sporting stuff and a great pity another final was impacted by injury although the punishing three weeks of Brookside competition is noted for its casualties….

So on to the main draw and the ladies’ singles. With Elena also reaching the ladies’ doubles finals the ratings computer was wondering if it had slipped up a bit, with a mountain of handicap for Nicky to climb against a more than capable player – and of course, the “Brookside Bounce” was going to be a factor… That said, facing off against the captain of the first team is a psychological challenge to any but the coolest of customers and Elena proved to be just that, winning in straight sets, but by no means easily against an opponent taking up the challenge with the characteristic determination we’ve all grown to expect (and fear from the other side of the net)… 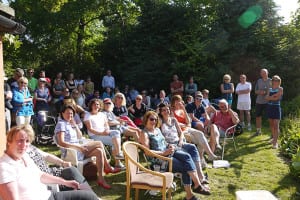 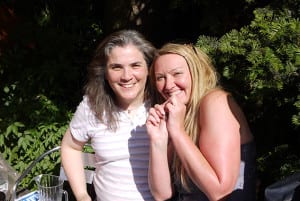 So if the computer’s implacable infallibility was ever in question, then who pops up in the mens’ singles finals as well as the doubles, but the irrepressible Antonio – a familiar figure on the last Sunday of the competition… In this particular case there was no handicap to contend with and old adversary Tom M was very much up to the challenge with few unforced errors and a polished display of punishing marksmanship to claim the trophy from the previous year’s winner. Having been criticised for returning the winter league winner’s trophy in a lamentable state earlier in the year Antonio threw all his energies into cleaning the Brookside trophy – which consequently ended up in three pieces shortly before the prizegiving and remains in need of proper repair.

And speaking of Winter League winners, Antonio’s nemesis Louise partnered by Tim came through to take the mixed doubles crown with yet another display of the sort of skill and teamwork which had put out some formidable opposition en-route to finals day. Not taking away anything from Graham and Sarah though who put on a remarkably consistent display of vigorous defence and imaginative shot-making before finally having to be content with second place.

The ladies doubles final was a mix of new blood and Highgate regulars – newcomer Elena partnered seasoned Brooksider Diana against irrepressible new girl Kate H and stalwart Trisha. Having checked and double checked handicaps Elena and Diana got off to a flying start with the sort of determination and sharp volleying last seen on the lawns of SW19. Kate’s formidable backhand and Trisha’s unflappable retrieving put up a great defence, but they eventually succumbed with Elena and Diana taking the trophy.

And who would have thought the “randomiser” could have partnered the organiser with Antonio to form the dream team of fierce attacker and implacable volleyer ? As luck would have it that was just what turned up on the opposite side of the net in the form of Tom W and Matthew – no weak links – or at least we thought but a vicious shot to the tenderest spot saw Matthew almost out for the count. Notwithstanding a speedy recovery, his back was no longer 100% following that incident and the killer serve and backhand overhead had lost a bit of sting. It still went the distance though with a thrilling three sets which by no means short on entertainment with some acrobatic clowning and award-winning racket throwing from Tom which the umpire chose to turn a blind eye to given the appreciative noises from the crowd… it could have gone either way but Richard and Antonio finally took the honours. Having knocked out the favourites in round one the outcome was almost assured…. 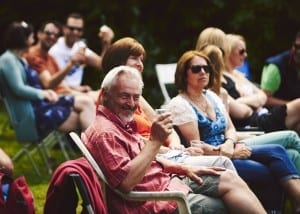 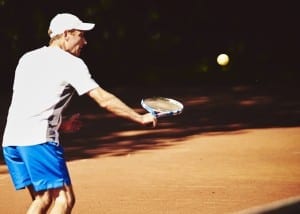 We were delighted to have our newly elected local MP Catherine West (yes, Galileo’s Mum!) on hand to assist with the prize-giving and apart from Louise scaring the fur off Tim’s unfortunate Westie the proceedings passed smoothly and the mens’ singles trophy managed to stay intact. Given the number of people hobbling around at the end of the competition it should come as no surprise that club is gearing up for wheelchair tennis either.

Nick Finley joined Richard R in organising this years Tournament (well it’s not like he does anything else!) and it was no surprise that Nick took on the role with his usual enthusiasm and commitment resulting in a very successful event. Dare one suggest that should he manage to penetrate the intricacies of the infamous Computerised Ranking System then perhaps he will soon be the new Brookside Tournament Director?

As well as NickF & Richard R a long list of people were thanked for helping make the competition possible, notably Nick Fowler who has spent many hours in the autumn and spring caring for the courts and delivering them in arguably the best shape we’ve seen them. Numerous volunteers managed by Maureen and of course our new events team Rebekah and Susan did a grand job under the tutelage of Vicky and Kim. It would of course have never get off the ground without the mysterious “computer” to which our grateful thanks should once again be directed.

The organisers hope you all enjoyed the competition and will be back again for next year. There are plenty of snaps up on the website so do take a look – there may be one of you!